Hi there – Phil from Edward Lee’s – here’s my 2 cents worth on the Mitsubishi FTO:

In a nutshell, these are what I call “a true sports car”.

My definition of a true sports car? “Compact, light, curvasceous, responsive and fun” and the FTO meets these criteria in spades. It’s got a grunty and torquey 2 litre V6 that sings and pulls smoothly all the way to the redline. It’s got a Ferrariesque raspy exhaust not that is intoxicating – it positively wails at high revs…!

I love the shape – it’s got curves on it like a woman – like a sports car should (sorry if that’s sexist – I am a bloke after all…). I don’t like sharp adges and angles and box shapes- that’s boring. The FTO to me has aged very well and still looks good today. The Mivec versions are amazing at high revs and I think these are way better looking than any of the Honda V-TECS in this price range and way better looking too.

Another amzing fact about the FTO is that despite its small stature, it can actually fit 4 adults inside in relative comfort. It’s got more room in the back seat than a Skyline, a Supra, an Integra, an RX-7 or even a big brother Mitsubish GTO…. incredible realy – I think it has to do with the deceptive roof design – it allows a bit of headroom in the back. The boot is bloddy big too for a sports car and will fit a couple of sets of golf clubs in there…

After importing and selling these for more than  ten years another brilliant feature is the bulletproof nature of the quad cam V6 – these are almost indestructable. It’s the same basic block as a 3.0 litre V6 Magna engine – the ones we see commonly going strong with 300,000 plus kms on the clock. The only issue I have seen is noisey lifters on cars that have not been regularly serviced….

These cars are getting on a bit now but the beauty of car shopping in Japan – especially in Tokyo is the average motorist only travells about 5000 kms per year – we can still find mint condition low milage cars over there….

Check out this one that has just arrived:

The only body style was a 2-door coupé, and all FTOs were front wheel drive. Either a straight-4 or a transversely mounted V6 engine was available, mated to either a 5-speed manual or INVECS-II semi-automatic transmission. Earlier models had a four-speed version, whilst the post-facelift versions had a five-speed.

In commemoration of its win at the Car of the Year Japan awards in 1994, Mitsubishi introduced a limited production of the GPX Limited Edition model. It can be indentified by its dandelion yellow paint scheme and “’94–95 Japan Car of the Year” emblems on the outer surface of the car’s C-pillar. It also has a rear screen wiper and limited slip differential as standard. Less than 500 of these are believed to have been produced.

The Nakaya-Tune FTO was a limited edition introduced in early 1997, and only 300 cars were sold. The car was tuned by Akihiko Nakaya, driver of an FTO in the All-Japan Grand Touring Car Championship in 1998–1999. The main differences over the standard model are a sports silencer, uprated brake pads, carbon fibre lip spoiler, and uprated suspension with Öhlins shock absorbers.

Cars built after August 1997 are regarded as facelift models, although the only exterior change was to the front bumper, which gained a larger air intake, deeper front splitter and restyled housings for the supplementary lights.

The facelift also brought the GP Version R. This model featured HID headlamps, blue or red front seats, uprated suspension, limited slip differential,and a different rear spoier in addition to the GPX specification. As this model was to be light weight, items such as side skirts, front fog lights, climate control, electric folding mirrors and sound insulation were left out.

An electric version, the FTO-EV, was produced by Mitsubishi Motors in 1998 as an experimental vehicle. The car utilised high-performance lithium ion battery power and set a multiple-charge 24-hour distance world record.

With it’s muscular curves, broad bonnet and pinched tail end, the FTO turned enough heads to win Japanese Car of the year on it’s debut in 1994… and it’s still doing it!

The hooded dials and an analogue clock lend a retro touch, contrasting with the futuristic equipment levels and materials…including a scalloped Momo wheel and waffle texture cloth upholstery. 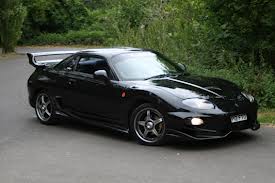 The insistent “door open” chime orders you inside as you stand looking into the FTO cabin, once you’re safely in, the first thing you notice is the well bolstered seats, particularly around the shoulders. Next is the waistline, so high, that you’ll feel closer to the road than you really are. The MIVEC (Mitsubishi Innovative Valve Timing & Electronic Control) engine is subdued up to 5000rpm, and then an angrier cam takes over, and the engine pulls hard, up to and above the 7500rpm mark.

Power is transferred to the front wheels in most examples by the ‘INVECS-II’ adaptive shift gearbox a Tiptronic style box that allows you to select a manual shift mode. Shifting either way, 100 is up in under seven seconds. Minor down sides are that rear passengers have zero leg room and the boot is shallow – tough to get a set of clubs in here. 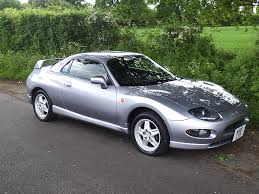 Yeap! We’d have one of these, but it’d have to be the MIVEC engined GPX. The MIVEC engine is said to be reliable, but keep an eye on the gearbox as it’s complex and expensive to repair. Expect to see more of the post 1997 cars around soon with more standard equipment (ABS, twin airbags) and a facelift. We’ll also see the GP Version R lightweight special – the ultimate production FTO… One of those thanks! 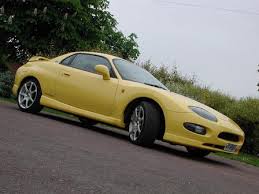