Retro is back stronger than ever – and Edward Lee’s is back importing a “retro-retro” car – The Nissan Figaro. We are now the only compliance shop in Australia licensed to comply Figaros and we are having so much fun going back in time in the process:

Time-warp to 1991 when the Japanese Economy was still in full boom with Nissan leading the way with turbo Skylines, 300ZXs and why not add Japan’s 1st retro 1950s car – the Figaro – with a turbo Micra engine.

Below is an article I wrote for Mighty Mods Magazine describing the fun assignment I was given to import 2 cars from Japan for the Mighty Mods Youtube Program: I had to get a Mini and Figaro for a series of Mighty Mods Challenges:

Just got a call from Marty and Moog it went a bit like this – “Phil we want you to bring in 2 unique high performance JDM sports coupes from Japan for a Mighty mods series of car challenges ….. and while you’re at it, please explain to our readers exactly how to import a car from Japan……”

And then Moog started carrying on about S15s and Supras and all this old hat import stuff…. bla bla – been there, done that…

I said “shut up Moog, I will get you 2 cars for your import challenge – just leave the car choice to me – I will get you a surprise pair of “mystery imports” that will freak you out – this will be the latest high tech cutting edge in JDM imports to AUS”…

I thought let’s have some fun and go RETRO JDM that no one here really knows can actually be imported to Australia:

I know Moogs 1st car was a bombed out Mini (…he raves on about it…) , and I know that Mighty Mods’ first car was a Nissan Micra: So I thought let’s shock the boys and serve them up a dose of nostalgia and get them two suitably matched collectable retro cars from Japan for the Mighty Mods Car Challenge:

On the Moog Menu: A JDM Mini Cooper BSCC wide-body blast from the past (This is an injected 1.3 packed full of 1960s goodness, real wood, plus cold a/c and airbag built in Japan by Rover.

Amazingly all the original sheet metal pressings were still used to produce these cars in the late 90s! A door or headlight from a 60s car will bolt straight on. Marty will freak out when he sees how ridiculously cheap the parts are for these cars….. and yes – it comes with adjustable wheel bearings! (real old school).

On the Marty Menue: Japan’s ultimate retro experiment: A Nissan Figaro (packed with a pumping 1.0 litre turbo Nissan Micra motor – music for Marty’s tinkering fingers – “please don’t add trendy rust or carbon wrap to this car Martin – or I will have the Bad Taste Police come and slap you”)!!!!

To get a new Figaro in Japan you had to buy a Nissan Lottery Ticket and go in the draw to be one of only 2000 lucky buyers! (This is true!) Every Figaro built was already pre-sold and they have a cult following in both Japan and the UK! (Just ask Eric Clapton!)

The Mission for Nobu – get me the sexiest Figaro on the face of Japan…. These cars are actually 6-10 years older than the Minis (they were only built in 1991)- so there are quite a few tired and worn out looking ones now… we have to get a mint one for Marty. The Figaros have amazing attention to retro-detailing – they are like an art-deco homage to British cars of the 1950s. The leather seats are styled after a Rolls Royce with classic intricate padded designs… The switch-gear is chromed and resembles the floral designs from grandmas chandelier… The steering wheel is the bakerlite style from an old Wolseley or Morris Minor – Even the stereo is a retro push-button jobie with a CD player cleverly hidden in the guts!

Figaro Checklist: make sure the clever foldaway vinyl roof works and hasn’t shrunk in the sun, check the dash for cracks, make sure the turbo spools up nice and strong (Marty has to beat the 1.3 litre Mini and we may needs a few pounds extra boost to get the Figaro over the line 1st !), check the leather seats for cracks and fading….

Now what colour? The Figaros are all bizarre 1950s pastels – sky blue and faded light greens – they even come in Lapis Pink and beige! As for the Minis the favourite in Japan is any shade as long as it’s green….??? You can have British Racing Green, Pastel Green or Midlands Green…. We’ll just have to wait to see what comes up at auction…

The Figaro was first announced at the 1989 Tokyo Motor Show, and caused such a frenzy of excitement that a lottery had to be held to decide who would get each of the 20,000 that were going to be made. Restricted to Japan only, each and every one was already spoken for when the car hit the showrooms in 1991.

Assembled by a Nissan special projects group called ‘Pike Factory’, the Figaro has a retro design based on the 1950s, but in fact there was nothing old-fashioned about it’s design. Based on the contemporary Micra chassis, it has leather seats, air conditioning, a CD player and an retractable vinyl roof. A full four-seater, it is powered by a 75bhp 1-litre turbocharged engine mated to a three-speed automatic gearbox.

The first Figaro to be originally imported to the UK was arranged by rock legend Eric Clapton, who fell in love with it while on tour in Japan and pulled a few strings to obtain one to bring home with him. Clapton was regularly seen driving around London in this Figaro and even used it in one of his music videos. He owned it from 1991 to 1996, since which time it has been kept as part of a private collection. 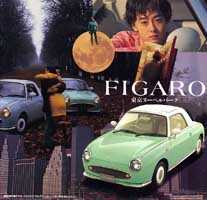 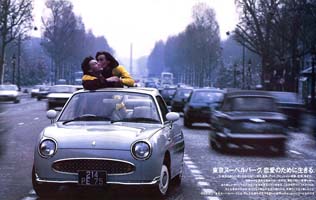 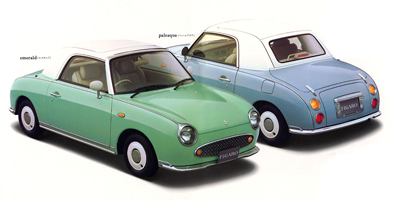 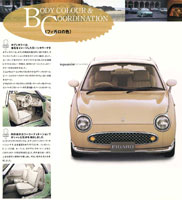 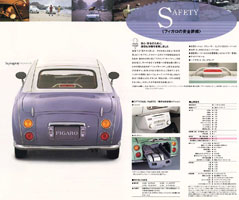 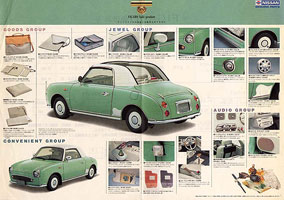